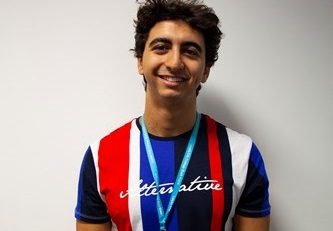 Shaheen Alghofar is one of the many students at Leeds Sixth Form College who received fantastic A level results this year. He received two As and an A* in biology, chemistry and maths respectively.

He came to study at Leeds Sixth Form College to re-sit biology and maths as his school sixth form wouldn’t allow him to do so.

Despite joining the college two weeks late, Shaheen felt welcomed by the team. He said: “I felt like I belonged straight away. I was accepted and was supported from day one.

“Leeds Sixth Form College gave me a second chance. There were occasions when I felt like giving up but my tutors gave me the motivation and encouragement to keep going and I’m so glad I did.

“The college gave me the independence and a taster of what university life would be like. A lot of study was done in my own time and tutors pushed me to go even higher.”

Shaheen would like to pursue a career in dentistry while swimming competitively in his spare time. He said: “I want to do something that is academically challenging that would also make an impact in the community. I would love to engage with local people and make a difference in their lives.

Shaheen will now be heading to Kings College London to pursue his dentistry dreams with the hopes of coming back to Leeds to open a practice in the future.